Claude Monet (1840-1926) was a French artist widely known as the man responsible for impressionism.

As a youth, Claude Monet would sell charcoal caricatures on the streets of Paris, which neighbors and locals would buy for ten to twenty francs. He was taught by both Eugene Boudin and Jaques-Francois Orchard. Boudin, specifically, taught him how to use oil pants and also introduced him to painting outside.

After the outbreak of the Franco-Prussian War, Monet fled to London and then later to the Netherlands, where he created twenty-five paintings, before returning to Paris in 1871. In 1872 he painted Impression, Sunrise, one of his most famous pieces. He tragically died at the age of thirty-two from tuberculosis. 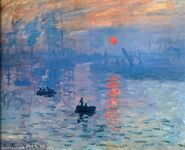 Impression, Sunrise
Add a photo to this gallery
Retrieved from "https://art.fandom.com/wiki/Claude_Monet?oldid=3384"
Community content is available under CC-BY-SA unless otherwise noted.