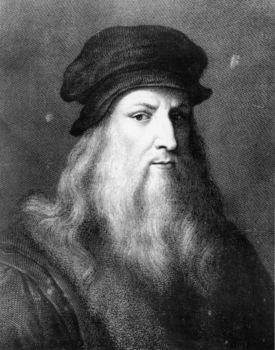 Leonardo da Vinci was a famous Italian artist. He was born on April 15, 1452 and died on May 2, 1519. Although he is best known for his artwork, he is also very well-known as a scientist, inventor and mathematician.

At the age of fourteen, da Vinci was introduced to artist Andrea di Cione (known as Verrocchio) whose work was highly acclaimed. When he painted The Baptism of Christ, Verrocchio was so amazed that he decided he would never paint again, knowing that he could never paint anything better than that.

After getting acquitted for a crime in 1476, da Vinci went missing for two years. When he came out of obscurity, he left Verrocchio's study and began living with Medici, in a Neo-Platonic studio of artists, philosophers and poets. Around this time he got his first two jobs--to paint an altarpiece for the Chapel of St. Bernard, and to create The Adoration of the Magi for the monks of San Donato a Scopeto. Neither job was completed, and things were put on pause when D'a Vinci went to Milan, where he worked from 1482 to 1499. During this time he painted Virgin of the Rocks and The Last Supper. da Vinci also paintied what is now argueably, the most famous painting of all time, Mona Lisa.

He was not just a painter he also was a great engineer who thought of some inventions that we use now a day's like so the tank, bicycle and the submarine.

The eras of da Vinci and Michelangelo overlapped, but they were reported to have bitter, competitive feelings toward one another due to their differing views about art.  The two artists' animosity towards each other was so great that they even got into fist fights in the streets and made derogatory challenges towards each other.

Retrieved from "https://art.fandom.com/wiki/Leonardo_da_Vinci?oldid=5341"
Community content is available under CC-BY-SA unless otherwise noted.